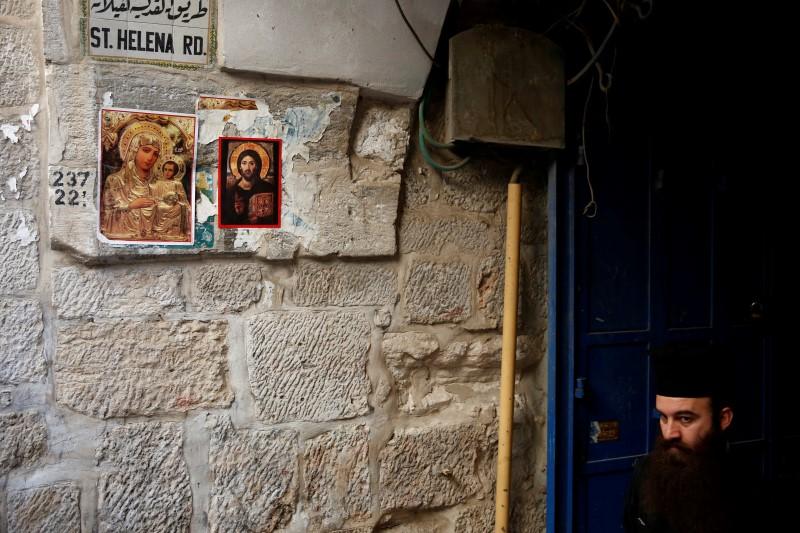 When hundreds of Jewish nationalists marched through the Muslim Quarter of Jerusalem’s Old City this month, waving banners and chanting songs in what has become an annual ritual, it wasn’t only Muslims watching warily. Christians were, too. Religious tension is nothing new in a city that has been the home of three faiths for centuries. But the outlook for the Christian minority, squeezed inside the ancient walls of the Old City and caught in the midst of a months-long wave of violence involving Muslims targeting Jews, has seldom looked tougher.

While the Muslim population rises steadily, now making up 75 percent of the 38,000 residents in the city’s alleys, and the Jews increasingly make their presence felt via the annual march and their settlements beyond the Jewish Quarter, the number of Christians has not risen in 50 years, hovering around 7,000.

“If a thousand Muslims leave Jerusalem, that’s one thing,” said Jamal Khader, head of the Latin Patriarchate Seminary near Bethlehem. “But if a thousand Christians leave, you threaten the identity of Jerusalem as a city of multiple faiths.”

That concern is clear to Basil Saed, 28, the owner of a gym in the Christian Quarter. After an attempted stabbing by a Muslim in the Old City several weeks ago, Saed came face-to-face with an Israeli military policeman hunting for the suspect.

“He was trembling he was so terrified,” said Saed, a prize-winning weightlifter who wears a large gold cross around his neck. “In an instant he could have shot and killed me.”

To Saed, both Israel’s tight security and the Muslim unrest make him uneasy, and raise questions for his community.

In the narrow, cobbled streets of their quarter, Christian families have been running arts and souvenir shops for generations, earning money from the steady flow of religious and other tourists who flock to sites like the Church of the Holy Sepulchre, the site where Jesus is believed to have been buried.

With the surge in violence that Jerusalem and surrounding areas have experienced since last October, tourism has become more erratic. Anecdotally, locals and tour guides say visitor numbers have dropped off sharply, hurting trade.

Residents like Youseph Shbeita, 35, the third generation owner of a religious icon shop near the Holy Sepulchre, are determined to hang on, seeing no option. But they can understand why younger Christians would want to leave.

“When you’re in the minority, you have to go with the flow,” he said, expressing a sense of responsibility for trying to preserve a Christian presence in the city where Jesus preached. “We just hope for calm, always for calm.”

Daniel Seidemann, an Israeli lawyer and activist who closely follows the community, said he feared it was being squeezed out by the Israeli-Palestinian conflict, with its tendency to focus on the Jewish and Muslim narratives.

“Since much of the epicenter of this round of violence has been in and around the Old City, it has increased their vulnerability,” he said, pointing to the lack of political and social institutions for Christians to depend on.

“I think it’s safe to say there are more Christian Palestinians in Chicago today than there are in Jerusalem.”

Most of the Christians in Jerusalem are Palestinians. Historically, the community has played a prominent role in the opposition to Israel’s occupation of East Jerusalem and the West Bank, putting it at odds with Israel.

Inside the walls of the Old City, however, there is still a degree of mutual dependence – Muslim merchants run stores on land owned by the Christian church, and Israeli Jews stop to buy fruit or a felafel from Muslim and Christian stallkeepers.

Even so, Saed, the weightlifter, doesn’t feel confident.

“For now, the Muslims and Jews are fighting each other,” he said. “But when they stop they’ll both look at us.”

You can see the report in this link